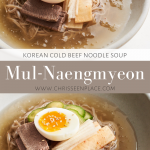 Mul-naengmyeon is a chilled Korean noodle dish that is refreshing for the summer. Thin and chewy buckwheat noodles are served in an icy cold and savory, beef-based broth. You also get crunchy, tangy bites of pickled radish and cucumber that make it extra crisp and delicious for those hot summer days.

Mul-naengmyeon (물냉면) is a Korean cold noodle dish that is served in an icy and savory beef-based broth with some sweet and tangy pickled toppings.

Bibim-naengmyeon means mixed cold noodles. It’s made with the same buckwheat noodles, and is instead mixed with a spicy and slightly sweet gochujang-based sauce.

It’s now a popular and perfect dish to have on a hot day. However, back when it was first made during the Joseon dynasty (1392-1897), it was only enjoyed during the cold winter months since there were no refrigerators or freezers.

Mul-naengmyeon was first made in North Korea and only became popular in South Korea after the Korean War. That’s also why it’s commonly known as Pyongyang naengmyeon (평양냉면).

The soup base is made with beef brisket that is slowly simmered to produce a rich broth. Other aromatics such as white peppercorn and ginger are added for a crisp, peppery flavor. There’s also some leek in addition to yellow onion for its sweeter onion flavor. Finally, dried anchovy and dashima are added for extra umami and depth of flavor.

Once the broth is done simmering, it is seasoned with soy sauce, salt, and mirin. Just a pinch of coconut sugar is added for sweetness to round out the savory soup.

It’s also common to add dongchimi broth to mul-naengmyeon. Dongchimi (동치미) is Korean radish water kimchi. It is sweet and tangy and only slightly spicy if you prepare it with some red long hot peppers. Homemade dongchimi is fairly easy to make. However, it does take some time and planning ahead if you want to use it in your mul-naengmyeon broth. If you want to skip the extra work, you could also buy it pre-made at your local Korean grocery store (e.g., H-mart).

The first form of mul-naengmyeon was actually purely made with icy dongchimi broth back in the Goryeo Dynasty (918-1382). Over time, Koreans started to use a beef or chicken broth for mul-naengmyeon.

When the dish is ready and assembled with the cold soup, noodles, and toppings it is also served with sides of rice vinegar and yellow mustard. You could mix these condiments into the mul-naengmyeon soup for extra flavor. While it is also totally optional, I highly recommend adding maybe a teaspoon of each to your mul-naengmyeon. The rice vinegar makes it extra tangy and refreshing, and the mustard gives the broth some kick and spice. You could also add more salt to taste.

I’ve read that buckwheat grows well in high altitudes and mountains. As you’ve read earlier in this blog post, mul-naengmyeon was first made in the mountains. And so, it is unsurprising that these buckwheat noodles were naturally used in this noodle soup.

The beef brisket that was used to prepare the broth is sliced thinly, against the grain and is served as one of the few toppings in mul-naengmyeon. Mu chojeorim (무초저림) or thin wide strips of sweet pickled radish and thinly sliced cucumbers are also important toppings as they add some tang, texture, and crunch.

Julienned Asian pear could also be added too for a sweet and juicy element. While it definitely is a delicious addition, I do find the other toppings more important in making this dish.

Finally, I highly recommend topping the dish off with a halved, soft-boiled egg. It adds another dimension of texture and is another great protein to have with this dish. Also, who doesn’t love a custardy, rich yolk center of a soft-boiled egg? 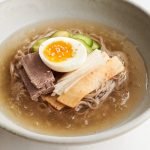 Mul-naengmyeon is a chilled Korean noodle dish that is refreshing for the summer. Thin and chewy buckwheat noodles are served in an icy cold and savory, beef-based broth. You also get crunchy, tangy bites of pickled radish and cucumber that make it extra crisp and delicious for those hot summer days.
Course: Main Course
Cuisine: Asian, Korean
Keyword: Beef, Buckwheat, Noodles, Radish, Soup
Servings: 4

Soft-boiled egg: 1) Add water to a sauce pan (just enough to cover the egg by about an inch) and bring it to a boil. 2) Get an egg straight from the refrigerator and carefully lower it into the boiling water. You can gently roll it around the sauce-pan in the first couple minutes so that the yolk will be centered. 3) Let the egg could for another 5 minutes. 4) Transfer the egg to an ice bath and let it cool for 10 minutes. 5) Carefully peel the egg and cut in half lengthwise.
Yeolmu Kimchi Bibimbap
Rosé Tteokbokki