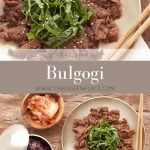 In this bulgogi dish, thinly sliced beef are grilled in a sweet and savory sauce that produces a delicious and caramelized char.

Bulgogi (불고기) is another Korean BBQ beef dish that is popular like galbi. Bulgogi, however, is easier to prepare than galbi. Since it uses very thin cuts of meat, it is quicker to marinate and cook. Bulgogi is named after the fact that it is traditionally grilled over an open flame. It quite literally means fire (bul, 불) meat (gogi, 고기) in Korean.

There are many styles and ways to prepare this dish. My recipe, here, is a simplified version that does not include vegetables or broth. However, I do like to top my bulgogi with some sliced, fresh perilla leaves and roasted sesame seeds before serving. I like to cook the meat until most of the marinade sauce evaporates and there is a nice, subtle char.

If you would like to add some other ingredients, I recommend cooking the meat with some sliced onions and enoki or shiitake mushrooms. Sliced carrots and green onions are also popular add ons. You could also add bits of bulgogi to japchae, a stir-fry noodle and vegetables dish, for added protein.

My bulgogi and galbi marinade are exactly the same. I find the marinade works well for both cuts of meats, and so sometimes conveniently prepare both at the same time. I usually freeze them in batches to cook for later meals.

You’ll find marinade recipes differing mostly in the ingredient(s) they use to tenderize the meat. The most commonly used meat tenderizers are Asian pears, pineapple, kiwi, and soda. Since Asian pears are not so easily accessible, I use Bosc pears in my marinade. I find that pineapple and kiwi tend to over-tenderize the meat. I’m also not a huge fan of using soda and instead like to use natural sweeteners (e.g., honey, coconut sugar) and tenderizers.

If you make this Bulgogi I would love to hear your thoughts. Feel free to leave a comment and/or recipe rating at the bottom of this page. And if you have a photo of your food, be sure to tag me on Instagram! 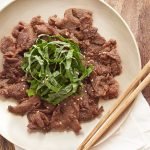