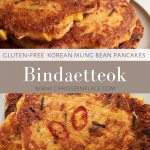 Bindaetteok are savory, gluten-free Korean pancakes made with a ground mung bean and chicken batter. After adding some crunchy mung bean sprouts, spicy kimchi, and buttery corn, the hearty batter is then fried til crisp and golden.

Bindaetteok (빈대떡), also called nokdu jeon (녹두전), are savory Korean mung bean pancakes. These pancakes are heartier than the more well-known Korean kimchi pancakes and seafood pancakes. Bindaetteok is also made without flour and is gluten-free.

While crispy and golden on the outside, these pancakes have a delicious and hearty center. They are savory, a touch spicy, and typically made with ground mung beans, kimchi, and ground pork. I like to use ground chicken, and decided to also add chives and corn. The extra protein from the beans and meat make bindaetteok a filling meal on its own.

In Korea, you can find these being sold freshly fried and steaming hot (along with Korean spicy rice cakes) in street carts. However, it is also Korean tradition to prepare bindaetteok with Korean rice cake soup (tteokguk, 떡국) on lunar New Year (seollal, 설날).

What are mung beans?

Mung beans are small green-colored beans. They are rich in vitamins and minerals. It is also a great source of plant protein and fiber.

You may be more familiar with mung bean sprouts which are commonly used in Asian stir-fry, salads, and soups. While these sprouts are equally delicious to eat, they are not as high in nutritional value as the unsprouted mung beans.

Dried mung beans are used to make the bindaetteok batter. They need to be soaked in water for at least 6 hours before use. I like to use peeled and split dried mung beans (깐녹두). With the green skin peeled away, they are pale yellow in color. You can most likely find these at your local Asian grocery store.

Once rehydrated, the beans are blended into a thick and slightly coarse slurry.

Some recipes also add sweet rice flour to the batter. However, more authentic recipes use a mung bean only batter.

Kimchi is another important ingredient in bindaetteok. It adds crunch and spice. I like to use more well-fermented kimchi because of its tangy and rich flavor.

Unsurprisingly, mung bean sprouts are another common addition in these ground mung bean pancakes. They give the pancake additional crunch. Some people add these fresh into the batter for an extra crunchy texture. However, I like to blanch the mung bean sprouts for a couple minutes.

Traditionally, fernbrake (gosari, 고사리) is added to the batter. I decided to pass on this ingredient since it is not the easiest to find outside of Korea. And I still find bindaetteok to be quite tasty without fernbrake.

Two thin slices of red long hot pepper are delicately placed at the center of each pancake. The vibrant red creates a beautiful color contrast. At first I thought they were mainly used for visual presentation. However, I appreciate the spicy, peppery heat they add to these pancakes.

I also have some non-traditional substitutions and additions in my recipe. Instead of ground pork, I use ground chicken. It is healthier and doesn’t change the flavor too much. I use chives instead of green onions since they are easier to chew in pieces and also add extra garlicky flavor. Finally, I add cooked corn kernels for texture and bursts of buttery corn juice.

If you make this Bindaetteok I would love to hear your thoughts. Feel free to leave a comment and/or recipe rating at the bottom of this page. And if you have a photo of your food, be sure to tag me on Instagram! 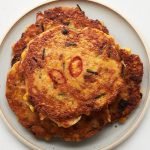