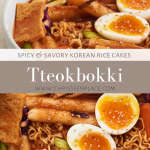 Back in Korea, you can find lines of food carts selling this popular Korean street food. It’s delicious to eat as an afternoon or late night snack.

Tteokbokki is made with cylindrical, Korean white rice cakes called garaetteok (가래떡). If possible, try to use freshly made garaetteok. The refrigerated or frozen ones tend to be a bit drier in texture.

These Korean rice cakes are slightly sweet but have a mostly neutral taste. They are soft, chewy and delicious.

This same garaetteok is also cut thinly at a diagonal to make tteokguk tteok (떡국떡), or rice cake ovalettes. You may remember these from my tteok guk recipe.

Keep in mind, the spiciness of the gochujang varies depending on the brand. Since the gochujang I use is already pretty spicy, I don’t add gochugaru in my recipe.

The soy sauce helps to season the sauce, and the crushed garlic enhances its savory flavor.

I typically use coconut sugar as a sweetener in my recipes. However, I find that using oligodang (올리고당) helps you get that authentic tteokbokki taste. Oligodang or oligosaccharide is a sweet rice syrup that is commonly used in Korean cooking. The sweetness helps round out the spicy tteokbokki flavor.

To make things more convenient, I like to use this dried anchovy seafood soup packet that you simply let simmer in water for about 10-15 minutes.

The traditional version of this dish, Gungjung tteokbokki (궁중떡볶이), uses a mild, soy sauce based sauce. It was first made hundreds of years ago for the Korean royal family during the Joseon Dynasty (1392-1910). This spicy tteokbokki, however, was created more recently in the 1950s and is a popular Korean street food.

You can also find recipes that add instant ramen noodles. The dish would then be called rabokki (라볶이). I add ramen noodles to my tteokbokki recipe for more variety in texture.

Since the noodles easily soak up the spicy sauce, you make quite a bit of extra sauce in my recipe. Initially it may look like there’s too much sauce, but the noodles will do their job soaking up some sauce and becoming super flavorful. The sauce will also thicken a bit more from the starch released by the noodles.

Other popular ingredients are fish cakes, soft boiled eggs, and even mozzarella cheese.

Typically, tteokbokki is prepared with only rice cakes, fish cakes, some soft boiled eggs, and maybe cabbage or green onions. However, I like to add a variety of colorful vegetables for additional nutritional value. In my recipe I add green onions, yellow onions, carrots, and red cabbage.

What tastes good with Tteokbokki

If I want to go all out and make a full meal with tteokbokki, I usually make it with some gimbap and fish cake soup. The street carts in Korea also usually sell these dishes together.

Gimbap is a savory Korean seaweed rice roll made with fillings such as carrots, spinach, pickled daikon and ham. The roll is cut up into bite-sized pieces that are perfect for dipping into the spicy tteokbokki sauce. A gimbap recipe is on my to-do list and will be up on the blog eventually!

For the fish cake soup, I follow my kimchi udon recipe. However, I omit all the udon toppings and noodles and simply serve some cooked fish cakes in the soup. It’s rich with umami, and has a clean taste that pairs well with the tteokbokki.

NOTE: To make vegetarian tteokbokki, omit the fish cakes and dried anchovy from the stock recipe.

If you make this Tteokbokki I would love to hear your thoughts. Feel free to leave a comment and/or recipe rating at the bottom of this page. And if you have a photo of your food, be sure to tag me on Instagram! 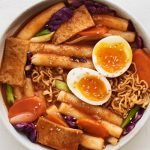