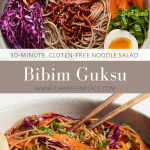 Bibim guksu is a gluten-free, Korean cold noodle salad tossed in a spicy, sweet, and tangy dressing. The thinly sliced vegetables and kimchi are easy to grab with the chilled buckwheat noodles for some crunchy, fresh bites. I also like to add some mint to make the salad extra light and refreshing for the summer.

This is a quick and simple recipe for a hot and lazy summer day. It is also an easy and delicious dish to share at your next summer potluck!

The only stove-top cooking that is required is boiling the noodles and (optional) egg. The assorted vegetables and kimchi are served chilled and fresh.

I use thin wheat noodles in my kimchi bibim guksu, which is simpler in ingredients. For this more veggie-packed recipe, however, I like to use buckwheat noodles. These thicker noodles don’t get so lost in the sea of vegetables, and you still get some good texture and bite.

The noodles only take 4 minutes to cook in boiling water. I would recommend to run them under cold water right away to prevent them from further cooking and sticking together. This is also helpful because you want to serve the noodles cold along with the other chilled vegetables.

Bibim guksu with soba noodles is more often seen prepared with a wide and colorful assortment of fresh vegetables. The most common toppings are julienned carrot, cucumber, shredded lettuce, and red cabbage.

I always like to have some sliced kimchi in my bibim guksu. It adds some tangy crunch and a kick of spice. I recommend using kimchi that has been aged for a while as opposed to freshly made kimchi. Well-fermented kimchi has richer flavors that are more deeply infused into the kimchi cabbage.

The wide assortment of vegetables in this dish also makes it more of a noodle salad. Kimchi bibim guksu, on the other hand, has fewer toppings and is usually categorized as a noodle dish. It is usually topped with simply some sliced cucumber, kimchi, and dried seaweed.

Fresh herbs such as perilla leaves (kkaetnip, 깻잎) are commonly mixed in as well. I like adding perilla, but it is only sold in some Asian grocery stores. When I want to make this dish on a whim, I like to instead add some thinly sliced mint leaves.

Mint leaves are not used in traditional bibim guksu recipes. It’s something I thought of, and I find that the flavors actually work very well together. The spicy cold noodles mixed with the cooling mint leaves makes it an extra refreshing and perfect dish to enjoy on a hot summer day.

You may recognize that the name, bibim guksu, is pretty similar to the Korean dish called bibimbap.

They both use a gochujang-based sauce and have a variety of toppings. However, bibim guksu largely uses fresh ingredients for its toppings. The toppings in bibimbap, on the other hand, usually require some stove-top cooking. You can find my al dolsot bibimbap recipe here.

Like bibimbap sauce, bibim guksu sauce is also gochujang-based. The fermented chili pepper paste is not only spicy, but rich with umami from the fermented soybeans that are also in the paste. Both sauces have a nutty flavor from the toasted sesame oil, subtle tang from the rice vinegar, and sweetness from the coconut sugar. However, one sauce ingredient that is unique to bibim guksu is soy sauce.

You could also add regular cane sugar, honey, or oligo syrup as sweeteners. Korean green plum syrup or maesil-cheong (매실청) is another popular sweetener. The syrup is commonly used in Korean cooking partly as a sugar substitute. It it is sweet and tangy and is used to make refreshing drinks, galbi and bulgogi marinades, kimchi, bibim guksu, and other Korean recipes.

If you make this Bibim Guksu, I would love to hear your thoughts. Feel free to leave a comment and/or recipe rating at the bottom of this page. And if you have a photo of your food, be sure to tag me on Instagram! 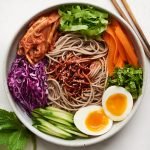 Soft-boiled egg: 1) Add water to a sauce pan (just enough to cover the egg by about an inch) and bring it to a boil. 2) Get an egg straight from the refrigerator and carefully lower it into the boiling water. You can gently roll it around the sauce-pan in the first couple minutes so that the yolk will be centered. 3) Let the egg could for another 5 minutes. 4) Transfer the egg to an ice bath and let it cool for 10 minutes. 5) Carefully peel the egg and cut in half lengthwise.
Korean Mapo Tofu
Bulgogi Burger (Korean BBQ Burger)