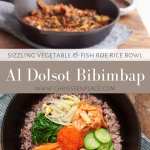 Al dolsot bibimbap is a sizzling hot rice bowl tossed with kimchi, fish roe, seasoned vegetables, and a spicy sauce. You also make a refreshing soup that pairs perfectly with this dish!

Traditionally, al dolsot bibimbap consists of some rice, tobiko (flying fish roe), pickled radish, kimchi, roasted seaweed, and radish sprouts. My al dolsot bibimbap is different, but it was prepared this way at one of my favorite spots back in Korea. The toppings in my version are more reflective of what you would find in a classic bibimbap recipe. In addition to kimchi and fish roe, I add carrots, soybean sprouts, cucumber, spinach, and shiitake mushrooms.

The tobiko is nice since it adds texture and extra umami to the bibimbap. The kimchi and cucumber toppings also add some nice crunch.

If you want to add some protein, you could add a sunny side up egg. You could also mix in some chopped bulgogi.

Instead of a stone bowl (dolsot돌솥), I use my 8″ cast iron skillet. I find it works equally as well due to its high heat retention. Simply heat the skillet over medium heat, and then add the sesame oil and bibimbap components. It will still be sizzling hot once you remove it from the heat. You’ll still be able to get that crispy, flavorful rice layer at the bottom of the sizzling cast iron skillet.

If you don’t have cast iron skillet, you can always use a regular skillet. You will just have to mix the bibimbap over heat and let it continue to cook for a bit longer to make sure you get the crispy bottom layer.

If you make this Al Dolsot Bibimbap I would love to hear your thoughts. Feel free to leave a comment and/or recipe rating at the bottom of this page. And if you have a photo of your food, be sure to tag me on Instagram! 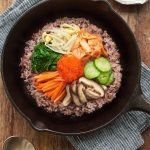