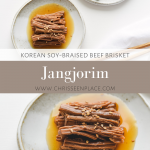 Jangjorim is a chilled, Korean soy-braised beef dish that is salty and slightly sweet. While commonly served as a side dish, it can also be used to make some quick and delicious jangjorim bibimbap.

Jangjorim (장조림) is a salty and slightly sweet soy-braised beef that is served chilled as a side dish (banchan, 반찬).

It can be stored in an air-tight container in the refrigerator for up to 7 days.

I use beef brisket in my recipe. However, some other popular meat cuts are beef eye round, flank steak, and shank meat. These are all relatively tough cuts of meat. However, if you cook them for a good amount of time (about 1 hour in this recipe) the meat becomes very tender.

Before I cook the beef brisket, I like to soak it in cold water to draw out some of the blood. This will give you a cleaner broth for the jangjorim sauce. After this step, I simmer the brisket with the aromatics (onion, garlic, whole black peppercorns, bay leaf, and ginger) for 45 minutes, and then another 15 minutes with the anchovy seafood dashima soup packet. The umami flavor from the dashima packet is important for the taste of the sauce.

Some recipes also add Korean radish (moo, 무) and mirin (rice wine), but I do not find these ingredients to be necessary.

The soy sauce is intentionally added near the end of the cook time. The salt from the soy sauce would otherwise draw out moisture and toughen the meat. Some coconut sugar is also added for some sweetness to balance out the saltiness. And just to note, this recipe uses less soy sauce than some of the other recipes I found online. I wrote this recipe to reflect the taste of my grandmother’s jangjorim, which is what I prefer.

If I want to make a main dish out of jangjorim, I like to make jangjorim bibimbap (장조림 비빔밥). In direct translation, it means jangjorim mixed rice in Korean. It consists of some warm white rice mixed with butter, jangjorim, crushed, dried seaweed, charred green onions and shiitake mushrooms. The latter two are my unique additions. I like the smoky flavor from the charred green onions and earthy umami flavor from the shiitake mushrooms.

You will also find recipes mixing in some scrambled eggs. However, I find that added eggs makes the dish a bit too rich for my taste. Most recipes also add some sort of pickled vegetable component. I like to add some Korean pickled cucumber called jangajji (장아찌). I will post my jangajji recipe soon. While not necessary, it does cut some of the richness from the butter and adds a tangy flavor profile to this savory rice bowl.

When I was a kid, my grandmother used to make this pretty often for me. The butter is key in this mixed rice bowl. It adds richness and enhances the flavor of the jangjorim sauce.

Once the jangjorim is already made, it is easy to make this rice bowl on a whim for a quick meal. I recommend eating it with a side of kimchi.

If you make this Jangjorim I would love to hear your thoughts! Feel free to leave a comment and/or recipe rating at the bottom of this page. And if you have a photo of your food, be sure to tag me on Instagram! 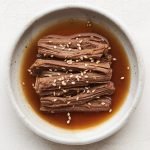 Jangjorim is a chilled, Korean soy-braised beef dish that is salty and slightly sweet. While commonly served as a side dish, it can also be used to make delicious jangjorim rice.
Course: Side Dish
Cuisine: Korean
Keyword: Banchan, Beef, Egg, Shishito, Soy Sauce

Once prepared, jangjorim can be stored in an air-tight container in the refrigerator for up to 7 days.
Baked Chicken Katsu
Soondubu Jjigae (Korean Soft Tofu Stew)