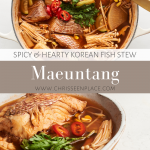 Maeuntang is a spicy and hearty Korean stew prepared with fresh fish, vegetables, and tofu. Cooking with a fresh, whole fish gets you a velvety, rich soup and refreshing seafood taste.

Maeuntang (매운탕) is a spicy fish stew that is great comfort food for any season. The piping hot soup and spicy flavor warms you up on those chilly winter days. In the summer, the spicy heat helps you sweat out the heat and cool down. The rich seafood flavor from the whole fish also makes the soup taste particularly refreshing.

Since the stew is packed with flavor and a good variety of hearty ingredients, it is perfect to enjoy with just a simple bowl of freshly steamed rice.

Don’t be afraid of having leftovers to reheat at a later time. I find the soup flavors intensify overnight. Sometimes it tastes even better the next day.

Which Fish is best for maeuntang?

Maeuntang is usually made with white flesh fish, such as red snapper (domi, 도미), cod (daegu, 대구), monkfish (agu, 아구), yellow croaker (jogi, 조기), and black sea bass. It is best to use fresh, whole fish. Just make sure to ask your fishmonger to descale, gut, clean, and chop the fish. This will significantly cut down prep time.

I’ve tried using fish fillet pieces, but found that using whole fish gives you a lot more flavor and a richer, velvety soup thanks to the fish skin and bones. You’ll see recipes including the fish head. However, I like to leave it out. It does give a lot of flavor, but the head is not always descaled as well as the body and I usually find myself tediously picking out the fish scales throughout the meal. If you have any tips to avoid this, I would love to hear your thoughts in the comments!

Maeuntang quite literally means “spicy soup” in Korean. The kick of heat is from the gochujang and gochugaru.

Gochujang (고추장) is a fermented Korean red chili pepper paste that is spicy, slightly sweet, and savory. Gochugaru (고춧가루) is dried Korean red pepper flakes. You can adjust the spice level of your soup by adding more or less gochugaru.

IMPORTANT NOTE: The spice levels of gochujang and gochugaru will also vary depending on the brand, so I do advise maybe adding a bit less the first time you cook a recipe with these ingredients. You can add a bit more heat before the dish is finished cooking if it is too bland, but it is not easy to make a dish less spicy after adding too much.

Toward the end of the cook time, I garnish the soup with some thinly sliced red long hot pepper. It adds a different kind of heat to the soup that is a bit sharper. The bright red also adds a beautiful pop of color.

The soup body has complex layers of umami. Some umami comes from the soup base, which is prepared with dried kelp (dashima, 다시마) and dried anchovy (myulchi, 멸치). Dashima broth is commonly used in Korean and Japanese cuisine and adds an important depth of flavor that is savory and umami-rich.

Normally, you would have to gut large, dried anchovies before using them. To save time, I like to use this dried anchovy seafood soup packet. It’s also easy to discard.

Gochujang not only gives the soup some spicy heat, but also its savory umami. Doenjang is a fermented Korean soybean paste that is salty, earthy, and rich with umami. You can find these Korean food staples at your local Korean supermarket (e.g. H-Mart), or you could order them online here.

The Korean radish (mu, 무) gives the soup a refreshing and clean taste. If you can’t find this at your grocery store, you could also use daikon radish. Korean radish is not as sharp in taste and is mildly sweet. Once the radish is cooked in the stew, it is tender, juicy, and infused with flavors from the soup.

The soup also gets a slight nutty flavor and crunchy texture from the soybean sprouts (kongnamul, 콩나물). Not all maeuntang recipes use soybean sprouts, but I really like the flavor that it adds to the soup.

A small knob of ginger adds a subtle, spicy, and warming lemony flavor to the soup.

Sliced, firm tofu is added toward the end of the cook time. As the soup continues to simmer, the tofu soaks up some of the soup making it flavorful. It’s also great for some extra protein.

At the very end, the soup is topped with some fresh crown daisy (ssuk gat, 쑥갓). It has a distinct herb taste that pairs well with seafood and umami flavors. I also use it in my kimchi udon.

If you make this Maeuntang, I would love to hear your thoughts! Feel free to leave a comment and/or recipe rating at the bottom of this page. And if you have a photo of your food, be sure to tag me on Instagram! 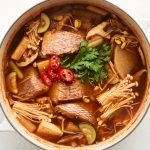