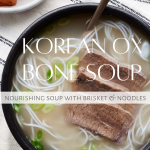 Seolleongtang is a rich ox bone soup that is particularly delightful to enjoy on cold day. While this nourishing soup takes some time to prepare, you’ll have plenty to freeze and enjoy later on a whim. The creamy, flavorful soup has a nutty, beef flavor and is finished with toothsome noodles and fresh, sliced green onions.

Seolleongtang (설렁탕) is a beef bone soup that is deep in flavor, milky in color, and rich in nutrients and minerals. It’s prepared by boiling ox bones at a rolling boil for hours.

You could use the soup base for other Korean soups such as tteokguk.

It is not hard to make, but it does admittedly take quite some time to prepare. Thankfully, most of the work is just letting it simmer on the stove top and adding or changing the water a couple times.

This nourishing comfort soup is worth the time.

If you’re an introvert like myself, this is the perfect meal to make when you need a day at home to recharge and do some house cleaning.

Which ox bones to use for seolleongtang

The ox bones typically used to prepare seolleongtang are:

I like to use a combination of marrow and knuckle bones. The knuckle bones have more collagen and will give you a richer soup that is gelatinous when chilled.

How to make seolleongtang

The recipe itself is pretty flexible in cooking ingredients and time. I like to cook mine using a large Dutch oven (Staub, Le Creuset). Korean restaurants like to serve this soup in Korean ceramic bowls.

I like to use at least 4-5 lb of ox bones (marrow and knuckle bones), and simply make sure that they are covered with enough water throughout the cooking time. Some people also like to add onion, garlic, and ginger.

After a good parboil to remove some bone impurities, you add new water and let the bones cook for a couple hours. The broth should start to look milky white after the first hour of boiling. The broth is then poured out into a large heat-proof bowl and new water is added to make another batch of milky broth. You could even repeat this process a third time with the same bones.

By the end, you’ll have collected a lot of broth, some of which you can save in the freezer (in freezer bags) to reheat and enjoy later.

A rolling boil is key in this recipe. The bones should be vigorously boiled over medium heat to get that full-flavored, creamy broth. If you, instead, simmer the bones over low heat as you would for Vietnamese pho broth, you will get a clearer broth.

After storing the broth in the fridge overnight, the fat will collect at the top and form a thin layer that can be easily scooped away.

Unfortunately, you cannot use an instant pot to get this milky broth. We really need that rolling boil.

You only need to season the soup with some salt and freshly ground pepper. I also like to top my soup with plenty of thinly sliced green onions. The fresh and sharp taste of the green onions cuts some of that rich soup taste.

You could also add some cooked thin wheat noodles (somyeon, 소면) or Korean sweet potato glass noodles (dangmyeon, 당면). I personally prefer adding somen noodles since they soak up the soup and so are more flavorful.

Seolleongtang is usually served with a side of Korean cubed radish kimchi (kkakdugi, 깍두기). I get mine from my local Korean grocery store, H-mart.

Like napa cabbage kimchi, it is similarly spiced with Korean chili flakes (gochugaru) and is umami-rich. However, it is a tad sweeter and has a toothsome crunch.

The spicy kick and crunch is great with seolleongtang, which is rich yet mild in flavor. I’ve also seen people add some of the kakkdugi seasoning sauce to their bowl of seolleongtang for a “spicy” seolleongtang.

If you make this Seolleongtang, I would love to hear your thoughts! Feel free to leave a comment and/or recipe rating at the bottom of this page. And if you have a photo of your food, be sure to tag @chrisseenplace on Instagram! 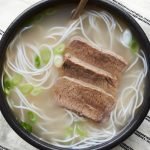 Seolleongtang is a rich ox bone soup that is particularly delightful to enjoy on cold day. While this nourishing soup takes some time to prepare, you'll have plenty to freeze and enjoy later on a whim. The creamy, flavorful soup has a nutty, beef flavor and is finished with toothsome noodles and fresh, sliced green onions.
Course: Main Course, Soup
Cuisine: Asian, Korean
Keyword: Beef, Beef Soup, Bone Broth, Soup
Servings: 6