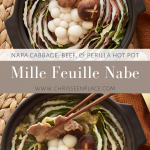 Mille Feuille Nabe is a popular Japanese hot pot made with plenty of napa cabbage, thinly sliced meat, and perilla leaves in a warm, umami-rich dashi broth. You can also add noodles at the end for some delicious noodle soup.

The name, mille feuille nabe, may have you thinking about the French pastry, mille feuille. Mille feuille means thousand leaves in French. Instead of having several alternating “leaves” or layers of thin puff pastry and cream, mille feuille nabe is made with layers of napa cabbage leaves and meat slices. Cooked in a warm dashi broth, this hot pot is simple to prepare and is one of my favorite comfort foods to share.

The two main ingredients in mille feuille nabe are napa cabbage and thinly sliced meat. I like using thinly sliced beef brisket or sirloin. However, I have also seen versions using thinly sliced pork belly. You can find this thin “shabu shabu” meat cut at most Asian grocery stores. If you cannot find pre-cut slices, you can freeze a pound of meat for about a 2 to 4 hours in the freezer or until it is firm enough to very thinly slice against the grain with a sharp knife.

I also like to add perilla leaves for its herby, anise-like flavor and shiitake mushrooms for extra umami. Bunapi shimeji mushrooms (white beech mushrooms) go well in this dish with their subtle nutty and sweet flavor. They are also a great “filler” for space at the center of the hot pot. You could also add a bed of bok choy at the bottom of the pot for extra vegetables.

IMPORTANT TIP: Napa cabbage releases a lot of water and shrinks when cooked, so it is important to pack these layers tightly into your pot.

Ponzu is usually served as the dipping sauce for this hot pot. You can buy this ready made. However, I like to make mine from scratch. It is a simple recipe consisting of soy sauce, fresh lemon juice, sugar and some hot pot broth.

It is easy to prepare this dish ahead of time and have it ready to cook. Unlike regular hot pot, mille feuille nabe has all of the ingredients already in the pot. You don’t add ingredients and eat as you go. This allows you to focus more on just eating and also makes clean up easier.

Mille feuille nabe is also a family-friendly meal with ingredients that are healthy, light, and clean. The striking presentation for this hot pot is also sure to impress friends and family at your next potluck.

If you’re looking for more hot pot recipes, check out this bulgogi jungol.

You can use the leftover soup at the end to cook some noodles or congee. At this point, the flavors from the meat and vegetables are also added to the already rich dashi broth. Add some of the dipping sauce to season the noodles and soup (or congee) and you have another delicious dish to end your meal.

If you make this Mille Feuille Nabe, I would love to hear your thoughts! Feel free to leave a comment and/or recipe rating at the bottom of this page. And if you have a photo of your food, be sure to tag me on Instagram!

(Optional noodles at the end of your meal)