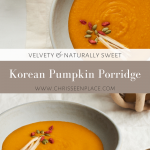 Hobakjuk is a Korean kabocha squash porridge that is velvety and sweet. The pear that is uniquely added in this recipe acts as a natural sweetener and adds a bright yet subtle fruity flavor.

Hobakjuk (호박죽) or pumpkin porridge is usually served as a light breakfast, comfort food, or dessert. The Korean word, hobak (호박), is used to collectively refer to pumpkin, different types of squash, and zucchini. This porridge is typically made with kabocha squash. In Korean, kabocha squash is called danhobak (단호박), which in direct translation means sweet pumpkin.

Most hobakjuk recipes say to steam the squash. However, I like to roast the kabocha squash because it gives it a toasty, deeper, and nutty flavor. The roasting also caramelizes the natural sugars in the squash and so enhances its sweetness.

After you scoop out the roasted squash flesh, you could use a blender or an immersion blender to puree the squash. You could also manually mash the squash with a potato masher.

Sweet rice flour is usually added to thicken the porridge. I like to soak whole sweet rice (chapssal, 찹쌀) in water for about an hour and then pulse it in a food processor with some water until it forms a fine slurry.

Most recipes sweeten the hobakjuk with cane sugar. I, however, add bosc pear to naturally sweeten this porridge. The subtle pear flavor gives this sweet and nutty porridge another dimension of flavor that is crisp and subtly fruity. The fall flavors of squash and pear also go beautifully together.

Red bean (paht, 팥), jujube (daechu, 대추), and white rice cake balls (saealsim, 새알심) are common toppings for this porridge. However, I decided to add some alternative toppings that have some more nutritional value. While totally optional, I like to garnish this dish with more sliced pear, dried goji berries, and pumpkin seeds.

If you make this Hobak Juk, I would love to hear your thoughts! Feel free to leave a comment and/or recipe rating at the bottom of this page. And if you have a photo of your food, be sure to tag me on Instagram! 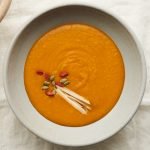