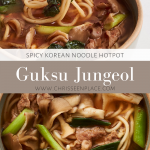 Guksu jungeol is a Korean noodle hotpot dish prepared with thinly sliced beef, mushrooms, and vegetables in a spicy and umami-rich broth. The perilla leaves add a distinct, herby flavor that beautifully complements the savory soup, beef, and meaty mushrooms. You can also end the meal with an equally delicious rice porridge made using the remaining soup.

Guksu jungeol (국수전골) is a Korean spicy beef and vegetable noodle soup that is prepared somewhat like hotpot. It’s a simple dish with simple ingredients that each add important flavor.

It was one of my favorite dishes while growing up in Korea. The only restaurant that I went to for guksu jungeol is a place called Hanwoori. They’re also well-known for their Japanese hot pot and grilled specialty meats. However, guksu jungeol was always my go-to dish.

After coming back to the States for college, I found myself craving this dish and especially when I was homesick. Since I don’t get to visit Korea often, I decided to recreate this dish in my own kitchen. And thankfully, my family agrees that the taste of my recipe is on point.

Guksu jungeol is similar to hot pot, but also has its differences. They both start with some broth simmering in a large metal pot right at your table.

Guksu jungeol quite literally means “noodle hotpot” in Korean. And so it is unsurprising, that the meal prep is more noodle-centric.

With regular hot pot, you would first cook the raw meat and vegetables in the simmering broth and eat as you go. Toward the end of your meal, the remaining broth is then used to cook the noodles.

With guksu jungeol, on the other hand, you stir in and cook all of the ingredients at the same time. This includes the thinly sliced meat, vegetables, mushrooms, noodles, and seasoning.

Once everything is cooked through you ladle it into bowls to serve. Any leftover soup is used to make rice porridge, which is what I personally look forward to the most.

I wrote the broth recipe purely based off the smell of the broth at Hanwoori restaurant. I could get clear notes of dried anchovy, dashima, and soy sauce. It smells vaguely similar to udon soup, and is also clear brown.

I first started out with just using umami-rich ingredients, such as dried anchovy, dashima, and soy sauce to make the broth. However, I later found that adding garlic, onion, and Korean radish made it taste even more similar to Hanwoori’s guksu jungeol. These are essentially the same ingredients I use to make my udon soup.

The broth doesn’t really have a complex flavor profile, but it is the perfect base to build flavors on with the other ingredients.

Each ingredient is simple and also essential in this dish. Once the broth comes to a simmer, you add thinly sliced beef, oyster mushrooms, green onions, and perilla. They each add unique flavor to the otherwise simple broth.

The beef adds richness to the soup, the mushrooms more umami, the perilla a distinct herby flavor, and green onions some subtle sharpness to the rich and savory soup.

I do like how thinly sliced beef is used instead of thicker cuts. The meat is easier to eat together with the other vegetables. And you still get that rich beef taste without it tasting like a heavy meal.

The broth is also seasoned with Korean red pepper flakes (gochugaru, 고춧가루), crushed garlic, and black pepper. You could add more or less of these ingredients depending on how spicy you want your soup to be.

The noodles I use are the same ones that I use for my jjajangmyeon and jjampbong. They are Korean “Udon & Jjajang” fresh noodles that you can usually find in the refrigerated section of your local Korean grocery store.

They come in a light coating of flour. As the noodles cook in the soup, the flour and starches release and slightly thicken the soup. They are mildly thick, tender when cooked, and perfect for this dish. I would not substitute it with any other type of noodle.

By the end of the meal, you’ll have some soup remaining in the large pot. The soup now has more depth of flavor from all of the meat and vegetables that were cooked in it. It is not gone to waste and is instead used to make a delicious finale to the meal, a cozy bowl of extra flavorful porridge (juk, 죽).

It’s easy to make. Stir in a cup of old or freshly steamed white rice into the soup, and let it simmer until the rice swells up a bit. Once the soup becomes thick from the starch released by the rice, stir in some crushed, dried seaweed, toasted sesame oil, egg, and shredded perilla.

It sounds like a simple porridge, but it is has so much umami. It is simply delicious. I sometimes look forward to this part of the meal more than the noodle soup itself.

If you make this Guksu Jungeol, I would love to hear your thoughts! Feel free to leave a comment and/or recipe rating at the bottom of this page. And if you have a photo of your food, be sure to tag me on Instagram! 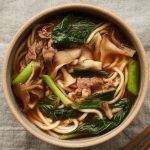